Forums
Main Categories
Under a Coconut Tre...
Violence in the USV...

Violence in the USVI: an anthropological explanation

Ever since my visit to St Croix some two years ago, I've been intrigued and puzzled by the phenomenon of high level of violence in the USVI, and its coexistence with the otherwise laid-back, slow, relaxed, island-like culture. On the one hand, Crucians are commonly described as kind, polite, warm, and tolerant to other people's views, religions, and life styles. It's indeed my impression of Crucians, as well. On the other hand, the rates of violent crime on St Croix (including homicide, burglaries, robberies, and gang-related activities) appears to be way out of bounds, compared to the U.S. average rates. The question is, what is so inherently unique to USVI which makes it possible for violent crime to be so pronounced among the kind and peaceful people?

There have been multiple explanations proposed, which include these:
1. History of colonization
2. History of slavery
3. Proximity to drug routes
4. High degree of poverty and income inequality
5. Disintegration of family values
6. Low educational levels
7. Relatively high levels of alcohol and drug consumption
8. Insufficiently equipped and trained police force
9. Corruption of public officials

The answer that I came up with is unorthodox, and it requires an explanation, so I hope you'll bear with me.

In the early 1990s, I read a book by Robert M. Pirsig, entitled "Lila: An Inquiry into Morals". Among other things, a particular non-mainstream anthropological theory in this book attracted my attention. The theory was that the relatively high levels of violence in the modern United States is a consequence of absorption of Native American culture into the minds and souls of the colonists, which persisted through the centuries up to the modern times.

Here is what Pirsig writes:

"With his cool silence and dangerous potential for violence, the cowboy is a rendition of the cultural style of an American Indian. If you take a list of all the things European observers have stated to be characteristics of white Americans, you'll find that there is a correlation with the characteristics white Americans observers have customarily assigned to the Indians".

Here is a fairly recent caricature of a modern American in the eyes of a European, which made waves in the social media. It's entitled, "All American Breakfast": 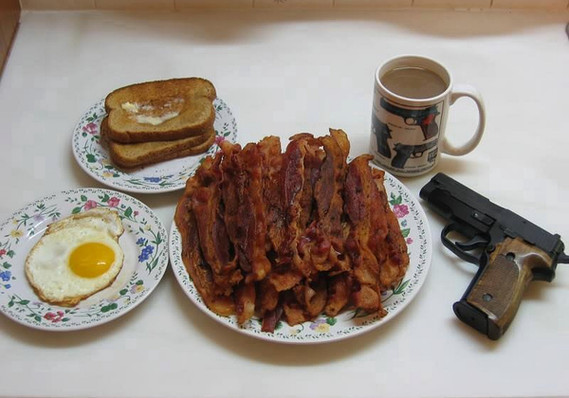 The indigenous people of USVI consisted primarily of Tainos and Caribs.

Let's examine the Tainos first. Here is how Christopher Columbus described them:

"They traded with us and gave us everything they had, with good will [...] they took great delight in pleasing us. They are very gentle and without knowledge of what is evil; nor do they murder or steal. Your highness may believe that in all the world there can be no better people. They love their neighbors as themselves, and they have the sweetest talk in the world, and are gentle and always laughing".

This description was made over 500 years ago, and when I read it, I thought, "That's quite amazing, because this is pretty much how modern Crucians are commonly described now".

And now let's move on to the Caribs. The Caribs have been described as vicious and violent warriors who endlessly battled against other tribes. Some sources indicate that women and boys from other tribes captured by Caribs were held in bondage. Women were made concubines. Boys were castrated and enslaved. When the boys reached adulthood, they were cannibalized. These extreme atrocities have been disputed by other sources, but the consensus appears to be that Caribs were indeed brutal and violent.

And thus came my anthropological theory that seems to resolve the paradox of high levels of violence in the modern kind and gentle mainstream culture of the modern USVI. The kindness and warmth originated from the Tainos. The violence and brutality originated from the Caribs. The wild blend of these two cultures is what we currently observe in the USVI.

What do you people think? Feedback is appreciated.

Quit smoking whatever it is your smoking.

I think the Cruzan friendliness goes back many generations, but the violence is a relatively recent phenomenon.

On the one hand, Crucians are commonly described as kind, polite, warm, and tolerant to other people's views, religions, and life styles.

I don't know one person who would describe Crucians as tolerant of other people's views, religions and lifestyles. Its quite the opposite.

Here's some food for thought (hold the pile of bacon please). I don't know much about the culture in Greneda & expect they had a similar history as far as Indians, colonization, & slavery go, yet the crime rate is much lower. I doubt it is the British influence, as Jamaica was British & they have lots of crime...?

The Caribs and Tainos in the VI were well-scattered by the very early 1500's, thanks to the Spaniards. A few sporadic habitations here and there through the 1500-1600's. but none were on St Croix when the French came in early 1600's. And only 4 were documented on St Thomas in the late 1600's. The Dutch probably used natives as slaves during the early settlement periods, and a handful were still on St Thomas when the Danes showed up. But since Tainos and Caribs had collaborated over the earlier years to fight the Spaniards, and even cohabited because of them, it's a stretch to believe that either culture survived with the distinctions in your theory. Any real native population was non-existent before actual settlement started. It would have been hard for settlers to assimilate the traits of a population that wasn't there.

Additionally, how would it explain the higher violence rate in the USVI, when Caribs also inhabited other Caribbean islands? And, if the only descent of those native populations came from slaves, how could the Tainos and Caribs be responsible for the current violent/non-violent nature you describe, since the majority of the slave trade eventually came from other cultures? And how did Pirsig explain why we assimilated from the violent, instead of the non-violent, Native Americans on the mainland?

Fascinating and perplexing history. But this theory has too many holes. Regardless, does this belong on the relocation board?

watruw8ing4 is correct.
If you know your history.
By 1696 the French evacuated St. Croix, taking everything with them including all their slaves. Native Carib and Tianos were long gone by then. Sporadic attempts by the English to settle after the French evacuation were repulsed. The Danish finally purchased St. Croix from the French in 1733, bringing only what and who they needed for rebuilding their plantation society.

Thank you very much for your comments, watruw8ing4.

it's a stretch to believe that either culture survived with the distinctions in your theory. Any real native population was non-existent before actual settlement started. It would have been hard for settlers to assimilate the traits of a population that wasn't there.

The Tainos and Caribs had 150 years of contact with the first colonists. During that time, the Tainos intermarried with the colonists. It's been reported that the DNA of the present Spanish-speaking people in the Caribbean is about 15% indigenous.

Additionally, how would it explain the higher violence rate in the USVI, when Caribs also inhabited other Caribbean islands?

But this theory has too many holes.

I know. I am working on those holes.

The major difference between USVI and other Caribbean islands is our wellfare system. Factor that into the observation.

But where did this glamorization came from? My theory is, in USVI (and some other Caribbean countries and territories), it originated from the Caribs.

Look, the "Thug Life" is glamorized not just by the thugs, but is celebrated by lawful citizens, as well. Think of "The Pirates of the Caribbeans" and the "Pirate Parades". These dudes were thieves and murderers (of Caribs descent), and yet our children are taught that the pirates were cool.

Imagine if in modern Germany, children were encouraged to play the "the Nazis vs the Jews" games.

The answer is simple: some people are just evil.

The answer is simple: some people are just evil.
Plain and simple.

This is like saying, "Some periodic elements are light, and some are heavy. Plain and simple", without making an attempt to inquire into why this is the case, and whether there is a relationship between them in the periodic table.

ps
There is no other way to explain it, other than the devil is loose in the world.
Pure evil is loose.

I did not say they were lesser sciences. I said you cannot scientifically measure and quantify the human mind. Studies have been done on the brains of dead serial killers and they still haven't determined what makes them kill.

"wanderer" is a racist troll, and should not be fed. He hides his racism behind a thin veneer of civility and "scholarship"...next thing you know, he'll be talking about skull measurements.

The Europeans who came to the "new world" brought with them an astonishing capacity for violence...they did NOT learn that from the "Native Americans", whom they brought to the point of extinction. People like "Buffalo Bill" are glamorized in history books, when what was done was the removal of the buffalo as a source of food, clothing, shelter, etc. for the "Native Americans".

"wanderer" really wants to say that Black people are inherently violent, but doesn't have the cojones to do so.

I agree with islandjoan. Humans are evil beings, and have always been evil, and will always be evil. This planet may very well be the hell that lost souls get sent to.

There is no other way to explain it, other than the devil is loose in the world.
Pure evil is loose.

And what makes the devil prefer to concentrate himself in some places over the other ones? Why East St Louis and not, let's say, Lake Havasu City?

Weren't the "Pirates of the Caribbean" Spanish, English, and French, etc, not Carib decent?

There is no other way to explain it, other than the devil is loose in the world.
Pure evil is loose.

And what makes the devil prefer to concentrate himself in some places over the other ones? Why East St Louis and not, let's say, Lake Havasu City?

This planet may very well be the hell that lost souls get sent to.

That is something I have always thought to be true! And maybe now in these times, there are more lost souls crowding the earth which accounts for the increase in evil crimes worldwide.

Wanderer is a racist troll for true!

And indeed, the Europeans have perpetrated much evil throughout history.

Nope. That's the answer you are looking for.

Nope. That's the answer you are looking for.

Which "Native American" taught this guy his skills??