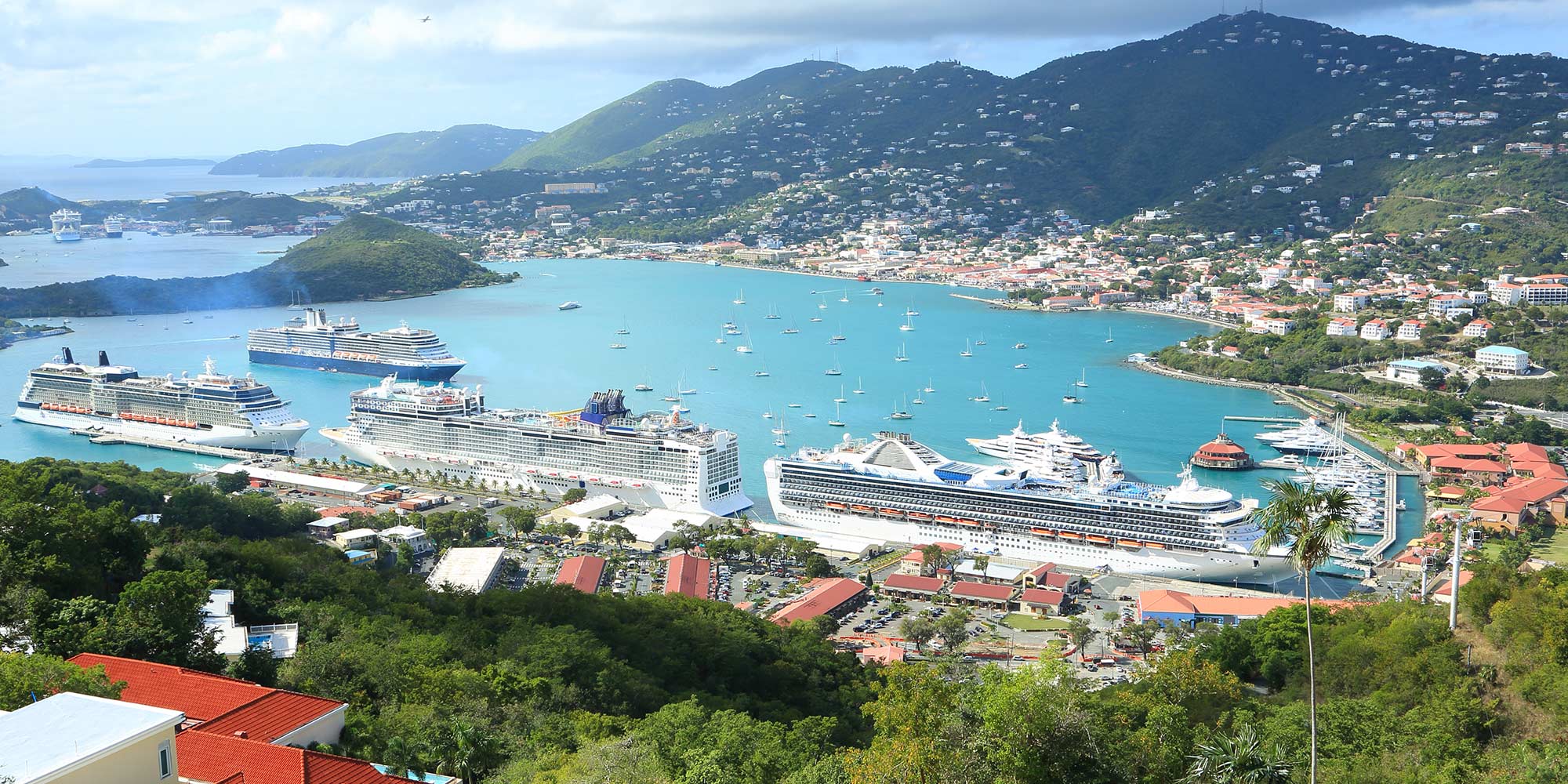 Where do I start. We looked at probably 13 different condos in June. We have been coming for the last 10 years for our annual family vacation. We spent a day with our realtor. I had done a lot of research before hand and had given him a list of units to view that I got off the MLS. Initially, we thought we wanted ocean front, but ended up at Mahogany Run on the hill with a gorgeous ocean-side view. We had to find a happy medium between what we wanted as owners when we are there and what someone else might want who was renting for vacation purposes. I think first timers would always prefer beachside. For us, that didn’t matter. We have always rented a car and we go to different beaches every day, so walking out to a beach wasn’t necessarily a priority. Space was. A lot of the units we looked at on the beach seemed smaller and more “cavey”. Typically, the 2 bedrooms, one had a beach balcony and the other was on the back side with no view of anything. Our unit has 3 ocean-side balconies and is a good size condo. HOA fees were a small consideration. Point Pleasant seemed to have the highest.

Another thing we found out, after the fact, is that from a financing standpoint (if you don’t plunk down 100% cash), if you get traditional financing, the lenders will only finance on “approved condos”, which we found out meant that there is what they consider condos and condotels. The complexes that have onsite management and operate as a quasi-resort are considered condotels and they won’t finance those. I have no clue how those folks purchase those unit unless they pay in cash. Didn’t ask.

We were blessed to be put in contact with someone who does side handyman work, to come do fix-it stuff at our condo for us and haul off the trash to the big dumpsters. He is head of maintenance at a commercial building. I’m not talking just trash, but a sofa/sleeper and loveseat and other big stuff. Stuff not worthy of even giving away. He put up our ceiling fans, a new window unit in our living area, and some other stuff we needed repaired.

We bought all of our paint & supplies at Home Depot and tiling products. We had someone come & paint the living room/kitchen. The painter was recommended again, and gave us a fair price. My sister & I painted the rest of the unit. It was a bear! But we were on a budget and time constraint. We basically had 14 hour days of labor. The first 2 days with no power, so we were limited to daylight hours. There was carpet on the concrete steps inside (split-level unit) and we ripped that up and tiled the stairs. Not only did we tile it, we mosaic tiled it. Yeah….we’re nuts! But…it is gorgeous! When I come back Labor Day, I will seal the grout.

Since we threw the sofa & loveseat out, we had to find something to replace it. That was interesting. Once we looked at furniture, we realized that the remaining chair cushions and dining cushions were worth recovering versus buying all new! We shopped around. We were flabbergasted at what the 3 piece, what I call Herculon, sets were selling for. We went to the old Rooms to Go, now Furniture to Go or something. They wanted $2500 for what I would pay $900 for in the states. It was all pretty much the same. We ended up by a recommendation, going to Silk Greenery and working with the owner. We ordered a nice fabric sofa sleeper for $1500, that included shipping from North Carolina, which is where she gets her furniture. She also has a seamstress there and fabric, so they are also recovering all of our cushions. The remaining furniture that we kept was rattan.

We used a new friend’s card to get into PriceSmart and bought a new window air conditioner. Will probably need to get my own cards for there this next trip.

K-Mart is our new best friend Prices are not much different than stateside with a few exceptions. Patio furniture was outrageous there. Go to Home Depot. We also brought down 4 very large suitcases of stuff…linens, bedspreads, towels, wine glasses, plates, etc. I bought those plastic bags from Linens & Things and vacuum packed all that stuff which took up 2/3 less room and I was able to get all that down there. Only one suitcase was over the limit which cost me $25. If I would’ve shipped it down…yikes. I priced a 25lb box at $65 for a 2-3 week delivery thru USPS. Of course we had our clothes in a carry on, but we didn’t need much since we were holed up painting. We were pretty nasty looking characters while we were there.

Had an interesting WAPA experience. We had someone get our power turned on for us and when she went there, they apparently had the seller’s account listed backwards and couldn’t find it. They didn’t know what the meter # was. She called the HOA maintenance guy and had him crawl under the building to get the meter number so that WAPA could turn it on. Now had it been us doing this…we would’ve been clueless and who knows how long it would’ve taken to get it on. She went down on a Wed morning and it was on Thurs afternoon.

A little more on the Closing: Keep in mind that my background is a paralegal with real estate experience and my sister (co-buyer) is a loan officer, so we weren’t clueless to the process.

We didn’t need a lawyer to negotiate the contract, it was done with the 2 real estate agents. We didn’t think we needed a lawyer to close the deal and had been told we didn’t have to have one but should consider it. We opted not to as to not bear the additional expense (in our lack of understanding how things are done there). At the time, we didn’t “get” that the “closing agent” was a lawyer, representing the mortgage co.

Consequently, I did most of the pushing to get the deal done. Without getting into detail here or mentioning any names, we started out with one broker, who said he could get the deal done in the 45 day time frame we had negotiated with the seller. We did get pre-qualified (would highly recommend since you’re not really taken serious because of the competition of buyers in some cases and hence are more of a risk of the deal falling apart). Paperwork was done within 10 days and approval would’ve been done within less than 30 days, but due to the carelessness of the broker, we encountered some problems. Again without getting into detail, we ended up moving our loan to a different broker 3 days after our initial agreed upon closing date. We had been approved by the initial broker but not for the loan we wanted, so everything was done, appraisal, title, etc. It came down to getting the deal closed on a timely basis and with financing that we wanted, where we weren’t getting gauged on the rate and points.

What we discovered was that things that are typically handled by the title company stateside, are done by the lawyers there. Well, if you don’t have one…..like who’s responsibility is it to order title insurance? Well no one had done it (we didn’t know) and fortunately our realtor got it taken care of. When we moved to another broker, his attorney stepped in and helped ramrod getting the closing done. He was great. He can be hired to represent individuals and does real estate & corporate law. I would highly recommend him. His name is Lou Flori. Typically his fees are around $1000 (as closing agent chosen by mortgage broker), however we agreed to pay a little more to get the deal done quickly, which due to the timing required him to work extra and on the weekend to get it done for us in under 10 days. The seller was represented by an attorney, as they had moved off island after we contracted their property. Their attorney was a piece of work.

I would also recommend Rick Obymachow at First Liberty Mortgage on St Thomas for a mortgage broker. He stepped in and got our deal closed in under 2 weeks. Granted the front end work had been somewhat done, however, I know with a shadow of a doubt that had we started with him, the deal would’ve closed on time if not before. He knows his stuff and his products. He also won’t gauge you on the front end.

In my opinion, these men both operate with a stateside mentality. If there are delays, what we found was that it usually had to do with other parties involved who operate on “island time”. It only takes one to slow it down. Both of these guys dogged the parties involved in order to get it done.

Our closing was interesting also. Would’ve never happened that way in the states. The seller’s attorney was there as their POA, the seller’s real estate agent was there (who also worked at the same company as our agent), the title company rep and the closing lawyer and us. Of course in the states, you are never in the room at the same time as the seller to close. The seller’s lawyer even tried to negotiate us paying 1/2 the stamp tax at the closing table, even though it had not been agreed to in the contract. Would never happen in the states, and frankly shouldn’t have happened at all. We were flabbergasted to say the least. I think the closing lawyer was too.

Anyway, it was definitely an experience with a lot of learning lessons in it.

Pre-Move Visit over a week in St Thomas

I LOVE St. Thomas and had a wonderful experience